Author Kimberly Thacker Webb spins a tale of fiction with a thin veil separating it from possibilities of becoming a reality. A story of will and choices, most importantly of consequences, awaits readers as they join the story’s main character as she unravels and breaks free from the varying Degrees of Deception. 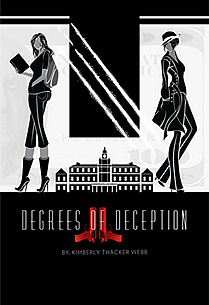 One careless indiscretion… One simple lie…

With two lives hanging in the balance, and seemingly no way out, Jackie Jones has created her own nightmare.

Degrees of Deception, the debut novel and series from author Kimberly Thacker Webb, features Jacqueline (Jackie) Jones a wealthy, but naïve college student from Texas who falls prey to hosting secret cocaine parties at her family-owned Washington D.C. row house. By day, Jackie is a struggling college student, but by night, she’s trapped in an underground world of crime servicing Washington, D.C.’s most influential social elite.

Completely unaware of the fast-paced racy lifestyle that D.C. brings, Jackie spends all of her money on a frivolous shopping spree that renders her almost penniless. Afraid to ask her parents for more money, she tries a quick, one-time gig to recoup the funds, but instead she finds herself in the hands of the ruthless and sinister head of the coke party empire, Nita Lockheart.

With her life quickly unraveling, Jackie must do everything she can to keep her scholarship, end a dangerous and intoxicating love triangle, and reclaim her life before Nita takes it away. After two and a half years of being manipulated, beaten, and traumatized, Jackie faces off with Nita, and for the first time, she doesn’t back down. She finds her inner strength and confidence and this time she is determined more than ever to gain her freedom. But she’ll pay an expensive price – the death of one of her closest friends as well as the trust and support of her family.